President of EBRD and President of Republic of Serbia visited Victoria Group in its member company, Sojaprotein 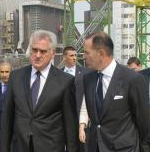 The President of the Republic of Serbia, Mr. Tomislav Nikolić, and the President of the European Bank for Reconstruction and Development, Sir Suma Chakrabarti, have today visited the Victoria Group, in its Bečej-based factory Sojaprotein, prior to the official opening of the new facility for the production of traditional soy protein concentrates, which is one of the biggest investments in Serbia this year.

Hosting this visit were the owners and the CEO of Victoria Group, as well as the General Manager of Sojaprotein, Ms.Branislava Pavlović. As part of the visit, a meeting of the Serbian President, Victoria Group Management and the President of EBRD was held in Sojaprotein, after which they visited the factory and the new facility.

During their stay, they were informed of Victoria Group’s business results to date, of its significance as the leading company in agribusiness, of its share in the total export of Serbian products, and of its completed and planned investments, all of which highlight Victoria Group within the entire region’s business environment. Guests were also shown the financial data of the factory Sojaprotein, indicating its consistent growth in all aspects of its business from the time of its successful privatization, 10 years ago.

The European Bank for Development and Reconstruction has been the biggest investor in Serbia since 1991. The President of EBRD, Sir Suma Chakrabarti, emphasized that the EBRD began its cooperation with Victoria Group by investing in its working capital, but came to become one of its shareholders by recognizing the company’s great potential, despite the economically challenging climate of the whole region. "From the example of Victoria Group”, said Chakrabarti, “we see that investments in Serbia are fruitful and we will continue to support not only our partners in Victoria Group, but also all economical sectors, including infrastructure, energetics, agriculture etc."

President Nikolić congratulated the company on its achieved results and the strategic direction of its development, stating that Serbia’s genetically non-modified products are its biggest potential exports. "Serbia will never produce genetically modified food”, said President Nikolić, “and Victoria Group is an example to other local companies that they should invest in production. The proofs of its success are not only its financial results, but also the 40,000 households that gain from working with the company, and we hope that others will follow its path."

Victoria Group's CEO, Zoran Mitrović, announced the official opening of the new facility on September 4th. This facility, he said, will provide new employment, an increase in exports and the even bigger development of Victoria Group.