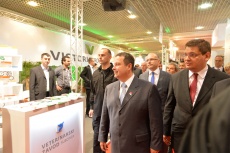 The International Agricultural Fair in Novi Sad, one of the most important agribusiness events in Serbia and the region, was opened today, celebrating its 80th anniversary. Victoria Group is traditionally participating on this event, presenting its business activities and product portfolio of member companies. After the grand opening in presence of the state officials and representatives of the mayor agro companies operating on the Serbian market, Group’s stand was visited by the Prime Minister of the Republic of Serbia, Ivica Dačić, and the Minister of Agriculture, Forestry and Water Management, Goran Knežević.

On the first day of the fair, Business Forum “Food, what connects us – unites us” was held, where Victoria Group was represented by Mr. Goran Borčak, Victoria Logistic’s General Manager. Forum’s topics were regional cooperation and exchange of experience in agriculture, food industry and commerce, steps after Croatia’s entrance in EU, investments of Serbian companies in Croatia and vice versa, as well as joint entrance on third markets. Other participants on the conference were Ministers of Agriculture of Serbia and Croatia, presidents of Chambers of Commerce and representatives of leading agro companies from both countries.

International Agricultural Fair will be open until 24 May 2013, in which period Victoria Group will present itself through numerous activities and presentations of member companies.