Sojaprotein discusses the export to the British market 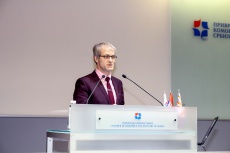 On April 26, the Chamber of Commerce and Industry of Serbia and the British-Serbian Chamber of Commerce organized a conference entitled “Business With the United Kingdom – Brexit as a New Opportunity”. The potentials of this market and the opportunities for the improvement of commercial cooperation were presented at the conference, along with the regulations and export procedures for the British market.

The first panel, “Meet the British Market – How to Export”, was dedicated to legal regulations and practical advice for potential exporters, while the second panel, “A Chance for the Serbian Economy – Success Stories”, involved the presentations of companies already doing business in the UK.

Sojaprotein, a Victoria Group company, was represented by Goran Obradović, Sales Manager. He introduced the attendees to the range of NON-GMO soybean products for food industry manufactured by Sojaprotein in accordance with the most rigorous international quality standards. He also spoke about the results that the company has achieved on this market, which is one of the 53 foreign markets where the products were exported last year. In 2016, Sojaprotein exported EUR 2.1 million worth of products to the UK.