Victoria Group by the side of Serbian Athletes 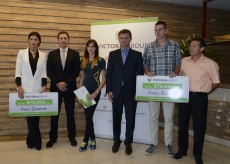 Victoria Group has awarded Ivana Španović and Emir Bekrić each with gift cheques for RSD 570,000 for their success achieved so far in sport. On this occasion, an agreement on cooperation with the Athletics Federation of Serbia was signed regarding a three-year sponsorship for Amela Terzić’s preparations for the 2016 Olympic Games.

Besides the athletes, the award ceremony and the signing of the agreement was attended by Zoran Mitrović, Chief Executive Officer of Victoria Group, and Veselin Jevrosimović, President of the Athletics Federation of Serbia.

“Athletes are the best ambassadors of our country and they confirm that wherever they are. Ivana Španović and Emir Bekrić proved that to us in Moscow, where we watched them with pride standing on the winning podium, and the award bestowed by our company is only an incentive for them to continue at the same pace. We are also proud that as a company we will support Amela Terzić in the next three years as she prepares for the Olympics and we believe that she will delight us with her results in Rio. Victoria Group is one of the largest investors in the country, and as a large exporter, we invest continuously in quality in order to maintain the image of domestic products. In the same way we would like to invest in the quality, persistence and potential of our young athletes who are the best product our country has,” said Zoran Mitrović, Chief Executive Officer of Victoria Group.

By entering into the agreement with the Athletics Federation of Serbia, Victoria Group became the first member of the 2016 Rio athletics sponsors pool.

“We are very glad that today, thanks to the support of Victoria Group, we have gained the first member of the Rio 2016 sponsors pool. Serbian athletics has yet to demonstrate its achievements, because with so many talented athletes like Emir Bekrić, Ivana Španović and Amela Terzić, we will certainly not be lacking in top results. In all this, help from companies is very important in order for every individual, and this time that individual is Amela, to have the best conditions so they can prepare properly,” said Veselin Jevrosimović, President of the Athletics Federation of Serbia.

“Every athlete needs to know that they have support both from the parent federation and the companies that recognise the importance of preparing well which is necessary for achieving notable results. I would like to thank Victoria Group for the funds that will allow me to work continuously over the next three years. I have upcoming competitions and preparations, and the ultimate goal is Rio. That’s every athlete’s dream but we will take things step by step – with such a team by my side everything will definitely be much easier,” said Amela Terzić.